By Forest of Dean and Wye Valley Review
Thursday 15th September 2016 7:49 am
Share 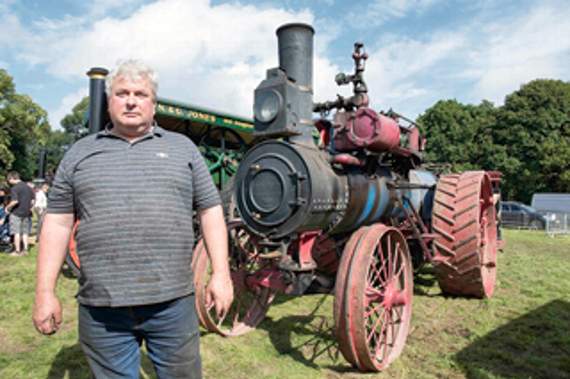 •Hadrian Spooner of Ross-on-Wye with a 1906 thresher that he bought from Nebraska in the United States.

Within an hour of opening, visitors were already being directed to the park and ride service because the car park for the event was already full.

The show, organised by the Forest Vintage Vehicle and Machinery Club, attracted a record crowd.

Club spokeswoman, Sharon Vickers said: “What a show it was – the weather was on our side again and thousands of people came through the gates to enjoy our fifth show. It just gets bigger and better.

“The numbers were up, the most we have ever had.

“Huge thanks go to all those people who helped to set up and take down.

“Particular thanks to those on the parking who did their very best under extremely difficult conditions.

“We never expected the volume of people that turned up – and along with those people comes vehicles.

The show featured everything from individual engines to an armoured personnel carrier and there was a range of activities in the main ring, including duck herding.

There was also music from Cinderford Band and local groups and a visit from the Gloucestershire Stormtroopers.

One of the highlights was the presentation of a new banner for Remembrance Sunday to the 2nd Coleford Brownies who marched into the main ring with standard bearers from the British Legion in Lydney.

Brownies Tawny Owl, Jane Hamilton, said: “The committee kindly offered to sponsor the flag because we didn’t have one. The Brownies didn’t have a flag to carry on Remembrance Sunday so the committee have bought one for us which is brilliant.

“We wouldn’t have the funds to just go and buy a banner and we will look smarter.”