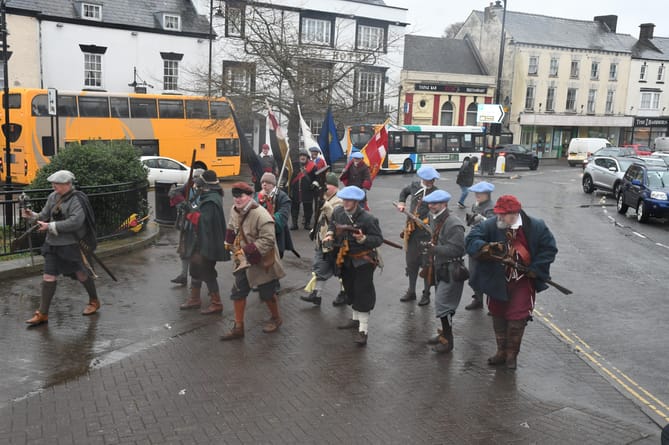 THE annual memorial of the 17th century Battle of Coleford returned this year after Covid forced its cancellation in 2021.

And while the rain caused by Storm Eunice made life difficult for re-enactors from the Sealed Knot, it never put the event in doubt.

Ian Blyth, who helped found the commemoration in 2010, said: “Rain isn’t going to stop us, only plague and pestilence does that.”

With the 380th anniversary of the battle next year, it is hoped to have a full re-enactment.

The event featured a parade, display of musketry, readings and a ceremony at the battle memorial near Coleford clock tower.

Mayor of Coleford Cllr Nick Penny said he was delighted to welcome the event back to the town.

He said: “We really missed this event last year.

“To stand in front of so many muskets firing at you is probably one of the highlights of my civic year..

“I definitely missed it but its great to have you all back. I’m grateful to the Sealed Knot for keeping this tradition going.

“The battle took place in 1643 and every year since 2010 we have tried to hold an event to commemorate it.

“Let’s hope it is back in the annual calendar.”

The battle took place when a 2,000 strong Welsh army loyal to King Charles I came through the Forest on its way to attack the Parliamentary stronghold of Gloucester, entering Coleford through Newland Street.

Mr Blyth said: “You can imagine 2,000 enemy troops arriving in a town of only 500 residents, they must have been quite fearful.

“They engaged with the local men for over an hour but eventually the local men realised they were outnumbered and they fled into the Forest which was much closer to Coleford then.

“Attempts were made to find the men in the Forest and that is normally done on horseback but they couldn’t do that.”

Reports at the time said the streets of Coleford ran with blood “so it was clearly a bloody skirmish.”

Mr Blyth said he would like to see a full-scale re-enactment of the battle.

He said: “Hopefully they’ll invite us back for a full-scale re-enactment in the town as it was in 1643. I’m convinced it can be done safely.”

The highlight of the event was a display of musket fire led by Captain Harry Middleditch.

The damp conditions made it very difficult to light the fuse to set off the powder in the muskets.

A prayer in memory of those who lost their lives was read by Keith James of Woolaston.

He also paid tribute to the late David Webb and Nigel Price who had played a role in the memorial.

He said: “Our lives were richer for knowing them and poorer for losing them.”

A posy of flowers was laid on the memorial plaque to the battle by five-year-old Henry Huck-Jones, of Tewkesbury.

Technically, this was not the first time he has been involved in the ceremony as his mum Debbie laid the flowers when she was pregnant with him as she wasn’t allowed to fire a musket - which she did this year.