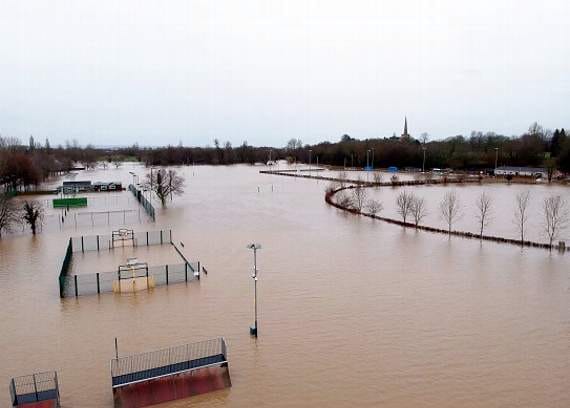 An aerial view of the tennis courts and surrounding area in Lydney underwater, taken by Ben Nash.

Lydney Rugby Club and the town’s tennis club say they will need to raise thousands of pounds to put right flood damage.

Across the Forest and Wye Valley roads were closed by high water levels.

Monmouth remained on high alert until early on Tuesday as water levels rose.

In Lydney, Gloucestershire Fire and Rescue pumped out homes in the Lakeside which had again been flooded.

The town’s recreation ground was still under water as the Review went to press on Tuesday.

The appeal by Lydney Rugby raised around £6,000 in 48 hours from the rugby community and other supporters after the club was flooded on Sunday.

The pitch, changing rooms, clubhouse and kitchen were all underwater.The clubhouse had recently been refurbished and suffered extensive damage.

In an appeal on the JustGiving website, a spokesman said: “The club is a real hub of the community with many different clubs/groups all using it throughout the week.

“It’s not just a rugby club.

‘‘We have hundreds of children who play in the juniors teams.

“We have a recently set up girls and women’s teams and three senior men’s teams.

“All of which need these facilities back in action ASAP.”

The appeal by Lydney Tennis Club raised almost £3,000 in a couple days.

An appeal on JustGiving reads: “Our courts and surrounding areas are under water.

“Our clubhouse, kitchen, changing areas and toilets are also flooded inside.

“We are a thriving club in Lydney with nine teams in the Gloucestershire League, (six ladies’ teams, three men’s) five junior teams and one GB seniors (over 40s) team.

“We also have over 100 junior members who use the facilities on a regular basis.

“We now need to raise enough money to help us with the urgent repairs to the courts/facilities and to recover from the damage the flooding has caused.

“Our goal is to be back up and running by the time the summer league starts in six weeks time.”

Readers of the Review can donate by searching for the clubs at www.justgiving.com.

The Wye Bridge at Monmouth was closed from 7pm on Monday as the river rose to record levels and nearby residents were evacuated.

At around 11.15pm on Monday, the Wye at Redbrook was 7.29m high, way above its normal height of between one and four metres.

Two severe flood warnings for Wye at Monmouth were in force on Tuesday morning with river levels expected to peak at around 8.30am.

y, the leader of Monmouthshire County Council, Cllr Peter Fox, said: “As Natural Resources Wales declares a severe flood warning, we are facing unprecedented times with levels expected to reach the highest on record for this area.

“The council and partner agencies face an extremely busy time over the next 24 hours while we deal with making sure those affected are safe.

“There will be disruption with the closure of Wye Bridge but I ask everyone to please be patient while the peak passes through the town.

“Teams will need to assess the area after the levels drop and it will be reopened as soon as it is safe to do.”

The river reached almost the top of the arches of the Wye Bridge on Tuesday but did not break it banks.

The main road to Chepstow from Monmouth, the A466, was closed on Tuesday morning at Bigsweir Bridge.

Other roads still closed on Tuesday were the A4136 between Staunton and Monmouth, the B4234 at Lower Lydbrook.

In Caldicot, the town’s country park was closed because of flooding and, on Sunday, there were reports of a ‘mini tornado’ after a short burst of high wind and torrential rain.