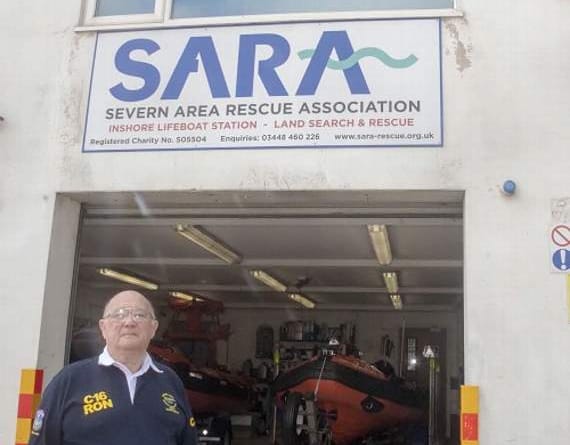 A MAN who has given 36 years’ service to rescue group SARA has been named volunteer of the year in the Forest of Dean Volunteering Awards.

Ron Harris from Sedbury started off as one of the crew of the Severn Area Rescue Association’s boats which have saved thousands of lives along the Severn, Wye and other rivers, as well as in land rescues.

The awards, which are organised by the Cinderford-based Forest Voluntary Action Forum, also recognise groups and business in the community.

Mr Harris said it was “quite a surprise” to be told that he had been named the Forest’s volunteer of the year.

In second place in the indvividual award was Andrew Jenkins of the Salvation Army while Mayor of Coleford, Cllr Nick Penny, was third.

Forest of Dean Dog Rescue was the ‘voluntary group of the year’ followed by the Children’s Opportunity Centre in Coleford and Crossroads Care in third.

The Dean Forest Food Hub won the ‘business in the community’ award, with Wyedance and the Brockweir and Hewelsfield village shop second and third, respectively.

The awards were decided by a public vote with a record 2,216 votes being cast.

Mr Harris said he had initially joined SARA to give something to the community and because “I enjoyed the boats.”

Today, his role is more administrative, and he will often be in the control room at SARA’s Beachley station when the boats or land rescue teams have been called out.

He said: “ I get things ready because we have younger men to do the rough stuff.

“Any time the boats go out there is someone here on station passing information on because we don’t always get the right information at the same time, so as it comes through we filter it through to the boats.

“When there is a call there will be a boat crew with three crew on each boat.

“In the control room there are up to three or four people because you are listening to the radios, you are taking phone calls and information from the Coastguard and people like that.”

“It’s a hard job for the crews – they can be out for long periods of time in all weathers – so we always make sure there are refreshments ready when they get back.

He said the greatest problem is the drift of the river, particularly in the area near the old Severn Bridge, if someone has gone into the water.

“If we know whereabouts they went in, then we can calculate how far downstream or upstream they are likely to be.

“If we know what time they went in we can calculate to a pretty good degree where they’ll probably be, so we’ll start the search at that position.”

When Mr Harris first became a SARA volunteer back in 1983, the boat was stored in Tutshill and had to be brought to the slipway at Beachley.

The organisation has developed enormously since then, with four stations at Beachley, Sharpness, Newport and Wyre Forest in Worcestershire.

Mr Harris said: “The award is for SARA. A lot of people give a lot of their free time to be part of it.”

He added: “As well as the calls, there is training twice a week and the crews are also part of the fund-raising.

“It costs £40,000-plus (to run the Beachley station), so fund-raising is very important.

“The award will help raise the profile of SARA.”