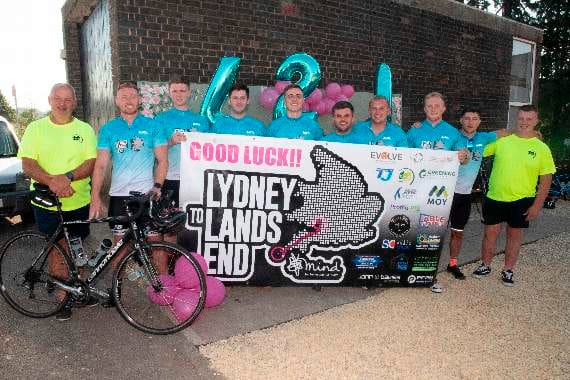 A GROUP of mates set off from Lydney this week to cycle to Land’s End in aid of the mental health charity MIND.

The 10 friends were given a rousing send-off from outside the Coco and Bliss cafe in the Bream Road car park in Lydney at 8am on Tuesday (July 20).

Ahead of them lay nearly 250 miles of pedalling to reach the most south-westerly point in Britain.

They were accompanied by a support van supplied by Lydney Builders’ Merchants SWM.

The ride to Land’s End represented a bit of a detour from the original plan which was to cycle to Paris last year.

Rider Charlie Powell said: “We’re all mates and we’ve come together to do this and SWM have provided the support van.

“We’ve collectively chosen MIND because some people have struggled over the last year and MIND is a charity that supports mental health.

“We’d like to thank all our families, friends and all the people who have supported us.”

By Wednesday evening, the lads had completed 150 miles in temperatures up to 31 degrees Centigrade.

The original target was to raise £5,000 but when they crossed the River Tamar into Cornwall on Thursday afternoon (July 22), the total was nearly £7,000.

To support the fund-raising effort, visit www.justgiving.com and search for Costner Lane.