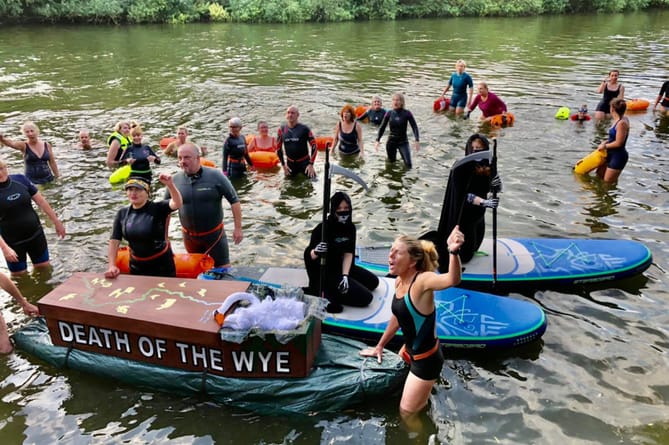 TACKLING the issue of river pollution has been made more complicated by devolution, a Welsh MP has said after meeting with Natural Resources Wales (NRW).

The UK Government recently announced a package of measures which will task the Environment Agency and water companies to cut the amount of raw sewage being discharged into rivers in England.

But responsibility for water quality in Wales rests with the Welsh Government and NRW.

Monmouth MP David Davies believes devolved matters overseen by the Senedd are not helping with finding a united solution.

"One thing we have learnt when it comes to dealing with the impact of pollution on the quality of our rivers is that devolution is making matters more complicated, especially when you have a river such as the Wye forming part of the border between England and Wales," he said.

"River cleanliness in England is regulated by the Environment Agency (EA), which is funded by and answers to the UK Conservative Government. However, the EA has no power in Wales.

"Here, regulating river cleanliness is done by NRW. This body reports to and is held accountable by the Welsh Labour Government."

At peak times, the antiquated Victorian sewage system struggles to cope and was designed to release storm waters into rivers or the sea.

While there is some basic filtering, foul waste and sewage can often end up being discharged too.

"Another problem is the level of phosphates entering our river system, partly from sewage but more generally from agriculture and runoff from soil."

Mr Davies, who first held discussions with NRW in August, has met again with senior officers and was joined by Monmouth MS Peter Fox.

"I also invited local environmental campaigners and concerned residents who had contacted me to listen in and ask questions. While a handful attended, some didn’t want to take part - which is a real pity," said Mr Davies.

"I have called on the Welsh Labour Government to replicate the measures being taken in England to reduce the amount of sewage being pumped into the water.

"The fact is the UK Government is taking action to address what it acknowledges is a very important issue. At the very least, the Welsh Government must adopt what is being done in England," he said.