Rescue with a ‘porpoise’ 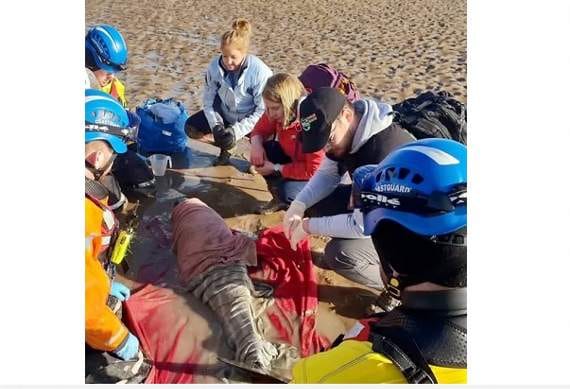 Volunteers looked after the stratnded porpoise until it could be released back into the Severn.

A STRANDED porpoise was helped back into the waters of the River Severn on Saturday (February 2), thanks to a concerted effort by a team of volunteers.

The marine mammal was spotted in the waters off Lydney and Chepstow Coastguard and Severn Area Rescue Association (SARA) responded, successfully releasing the porpoise around two hours later.

A spokesperson for SARA said: “The Sharpness Lifeboat crew was called out to assist Chepstow Coastguard following reports of a porpoise stranding off Lydney.

“The small SARA Rescue Boat 12 was launched, due to the low water. The two SARA crew members worked with members of British Divers Marine Life Rescue and Chepstow Coastguard, just downstream from Lydney.

“The porpoise was moved to an area of water alongside the sandbank it beached on, to await the incoming tide allowing it to return to deeper water.

Crews were with the porpoise for over two hours ensuring it was safe and well to release under advice from veterinary professionals.

“Rescuing marine mammals like this is a rare but important part of our role.

They do sometimes come a long way up the river and the sands can be treacherous at low water.

We hope this animal was not injured and we hope we don’t see it again.”