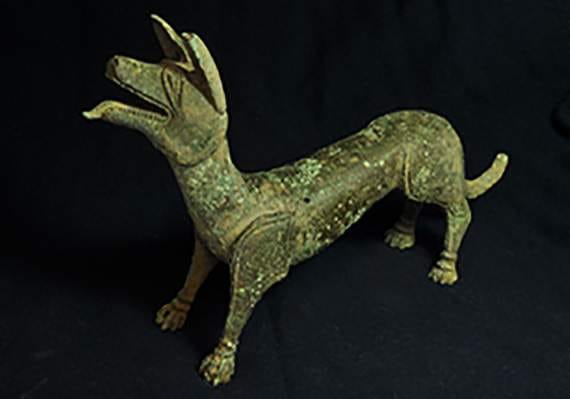 A HOARD of Roman bronze artefacts discovered in Gloucestershire includes a unique statue, never found before in Britain.

The 1,700-year-old licking dog is a ’healing statue’ and experts think it may be linked to the Roman temple at Lydney or that there could be a previously undiscovered temple elsewhere in the county.

Pete Cresswell and his brother-in-law Andrew Boughton, who made the find, described it as “a once-in-a-lifetime” discovery.

The artefacts are of such significance that they are being kept in special conditions at a museum in Bristol.

Experts are piecing together the clues and the findings will be launched at the British Museum in London, probably at the end of the year.

Many of the artefacts appear to have been deliberately broken but the dog remains intact.

Archaeologists believe the items may have been stashed by a metal worker who intended to retrieve them to melt and recast.

Mr Cresswell said: ““It’s not every day you come across a hoard of Roman bronze.

“We have been metal detecting for a combined 40 years, but this is a once in a lifetime discovery.

“As soon as I realised the items were of historical significance I contacted the local archaeology team, who were equally excited by the find.

“It’s a great privilege to be able to contribute to local and British history.”

“Most amazing of all is a complete and finely detailed standing dog statue, which is a unique find for British archaeology.”

Gloucestershire County Council’s Cabinet member for fire, planning and infrastructure, Cllr Nigel Moor (Con, Stow-on-the-Wold) said: “How wonderful to have made such an astonishing discovery, and what a fantastic coup for Gloucestershire.

“The prospect of more hidden treasures buried here in the county is an exciting one indeed for local residents and historians alike.

“Congratulations to Pete Cresswell on making this find and fitting another piece into the jigsaw puzzle of Gloucestershire’s rich heritage.”