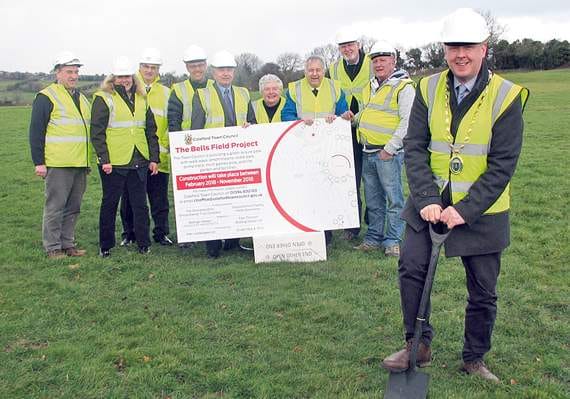 A TOWN council has launched “its biggest project so far” which will transform a nine-acre field into a green recreational area.

The Lords Hill scheme, which will overlook the town, will include a skate park, bike pump track and multi-use games area for youngsters, a wildlife garden with a pond, an amphitheatre, a First World War sensory garden memorial area, fitness exercise points and fully accessible ‘trim trail’ path.

There will also be large green areas for picnicking, kick-abouts, dog walking and playing, and tree, shrub and bulb planting, while meadow areas will provide “an attractive landscape” with a diverse variety of habitats.

Cllr Penny said: “I am very proud that this town council is now able to deliver on its promises and bring this scheme to fruition. I was delighted to break the soil just ahead of the works commencing later this month.

“This is by far the most ambitious project that Coleford Town Council has undertaken so far and we are sure that the finished park will be a great asset for the whole community to enjoy.”

Parking for up to 20 cars will be provided on the site, which will be open 24 hours a day and also include a toilet block and storage building, while the current stone wall beside the main road will be replaced by railings.

The bulk of the money has been secured from housing developers paying towards new leisure facilities, and it is hoped to open the recreation ground later this year.