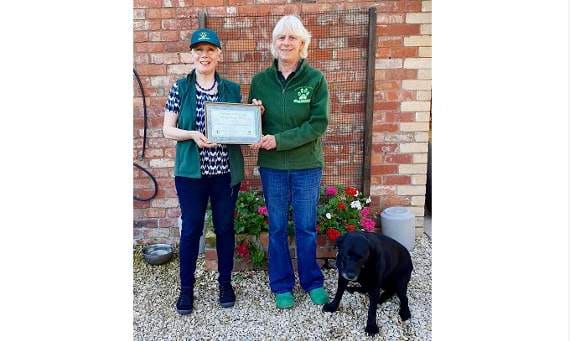 VOLUNTEERS have been recognised for their contributions to the community with the presentation of the third annual Forest Voluntary Action Forum (FVAF) awards.

Sixty one individuals, groups and businesses were nominated and around 2,200 votes cast by members of the public wanting to celebrate the region’s community heroes.

Ron Harris from Sedbury, a volunteer of 36 years at the Severn Area Rescue Association (SARA), won the Cinderford-based organisation’s Volunteer of the Year award.

Ron’s passion for what he does, even after so many years was described as “quite remarkable”.

Ron spoke at length about the huge demands facing the charity, not only in the increasing need for the work they do but also the donations and volunteers required to keep it going.

He selflessly stated that “this award is for SARA, and I hope this bit of extra publicity will go some way to helping our cause”.

In second place was Andrew Jenkins of the Salvation Army while Mayor of Coleford, Cllr Nick Penny, was third.

The Forest of Dean Dog Rescue won the Voluntary Group of the Year Award, followed by the Children’s Opportunity Centre in Coleford and Crossroads Care in third.

The rescue has quickly established itself as a well-known charity in the district and rehomes around 70 dogs a year.

A group spokesperson said: “we are absolutely delighted to receive this award and humbled to have had so many votes.

“We are funded by donations and run entirely by volunteers who all work tirelessly for local dogs in need.

“It is incredible to receive such recognition.”

Not-for-profit social enterprise Dean Forest Food Hub won the Business of the Year Award, with Wyedance and the Brockweir and Hewelsfield village shop second and third

Hub member Jacky Smith said: “We’re really chuffed to bits about getting this.

“We didn’t even know we were nominated, so huge thanks to everyone who voted for us.”

Jacky explained that they were especially pleased because they are all about communities: be it customers, producers, volunteers or staff, they are part of a community that works together to deliver quality food, keeping the carbon cost to a minimum, while making sure that turnover goes to local producers so that they can supply people across the Forest.

She ended by stating that “we’ve got a brilliant set of food producers around here, and it’s a privilege to be able to say that we help them share knowledge and resources, so that they can all do better.”

Chris Brown, manager of the FVAF, which supports hundreds of volunteers and community groups each year, praised the contributions of the community heroes in what are extremely tough times for many.

He said: “All of the organisations mentioned started with a small group of people who wanted to stand up and find ways to tackle challenges facing our communities.

“This passion and drive to actively seek to improve the lives of others is inspiring and I’d like to take this opportunity to say thank you to all involved for doing their part in making the Forest of Dean so special.”

For further information about getting involved in a community group or charity near, contact Chris on [email protected] or call 01594 822073.