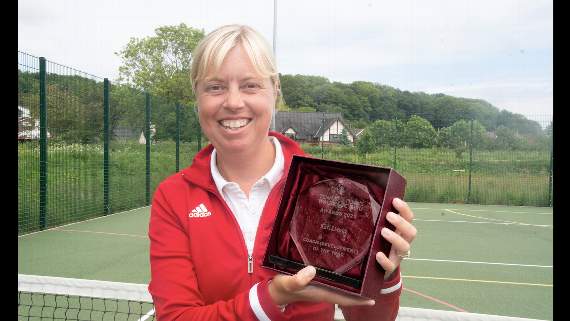 Kari Davies with her Welsh Development Coach of the Year award.

A SEVERNSIDE tennis coach has been named runner-up in national awards run by the sport’s governing body.

Kari Davies, who teaches in Caldicot and Magor, was named runner-up the development coach of the year in the Lawn Tennis Association (LTA) awards.

She had already won the same accolade in the Tennis Wales awards which meant she became a finalist in the national competition.

She was one of 2,600 nominees for regional awards around the country, the highest number ever.

Dominant Stags into final of the Combination Cup

Her determination to keep lessons going through lockdown, her work with children with special needs and her efforts to encourage more women and girls into the sport were key to her success.

Introducing the award in an online ceremony, British Davis Cup captain Leon Smith said: “Kari tailors her sessions to provide a variety of drills and activities to suit all abilities and has had particular success engaging those with special educational needs.

She kept spirits high during lockdown with online challenges that were open to the whole community and showed great initiative when forced to use a local football field while the normal courts were being refurbished.”

Kari is also an ambassador for She Rallies, which is run by Judy Murray, to make tennis more appealing to women and girls. The national awards are usually held at

Wimbledon but were broadcast online because of Covid restrictions – giving Kari more time for the sport she loves.

She said: “I was playing matchplay and listening out to it. It’s amazing to be named runner-up, it came as a total surprise.”

Kari first picked up a tennis racket at the age of four and played at county level for Gwent. She said: “I decided to become a coach to stay in the world of tennis – seeing the children develop, achieve and have a smile on their faces makes my job.’’

LTA President David Rawlinson said: “The LTA Tennis Awards are a real celebration of the people that make our sport thrive.

"They celebrate the achievements made by outstanding volunteers, coaches, officials, venues and players, who are all vital in helping us to grow the game.

"The past year has been challenging, but to see the tremendous positive contributions the nominees have made to the sport and to their communities has been tremendously uplifting.”